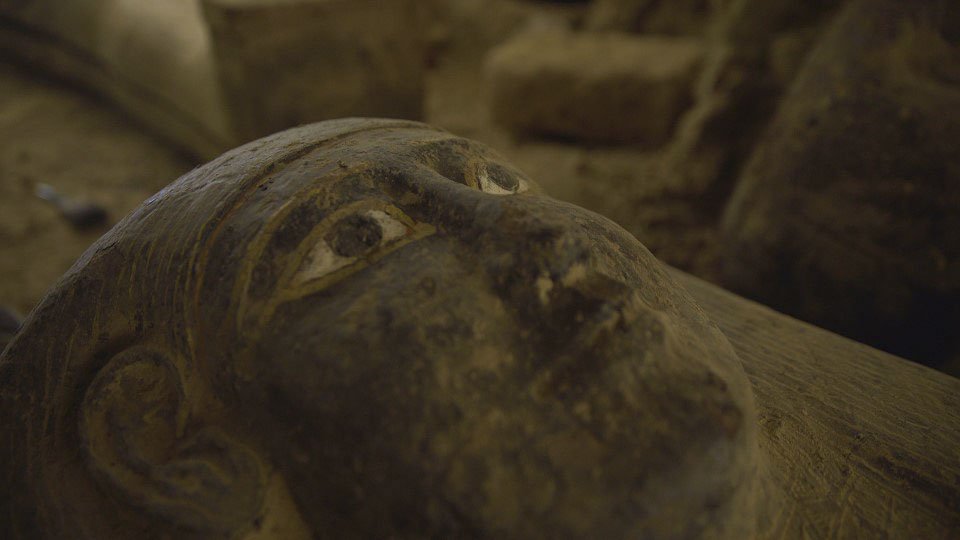 Archaeologists have made an amazing discovery in a tomb in Egypt.

Almost 30 sarcophagi have been found at the the ancient site of Saqqara, south of Cairo.

These coffins are believed to be around 2,500 years old and, remarkably, have remained sealed and undisturbed over the millennia.

Thirteen of them were discovered earlier this month but experts say they have uncovered a further 14 from the hidden necropolis.

The discovery is now the largest of its kind.

Experts have released pictures showing the brightly-painted wooden coffins – still intact and colourful after all these years.

Saqqara was an active burial ground for more than 3,000 years and is a designated Unesco World Heritage Site.

According to the country’s Ministry of Tourism and Antiquities, the coffins were found in a burial shaft 11 metres (36 feet) below the ground, stacked on top of each other.

‘The identity and positions of the owners of these coffins or their total number have not been identified, but these questions will be answered within the next few days through the continuation of excavations,’ the Ministry said in a Facebook post.

Many tombs and burial sites have been looted or raided since the time of the pharaohs, so to find undisturbed treasures like this is a monumental discovery.

Saqqara is believed to have served as the necropolis for the city of Memphis – once the capital of ancient Egypt.

The ancient Egyptians interred the dead there for over 3,000 years so it’s become a site of huge archaeological significance.

While rich individuals were buried surrounded by jewels and treasures, archaeologists have recently turned up much simpler burials. These were likely people belonging to the middle and working classes.

Hopefully, this discovery is just the first of many exciting finds as researchers continue to uncover more of the site.