Christmas on the Red Planet as festive silhouettes appear on Mars 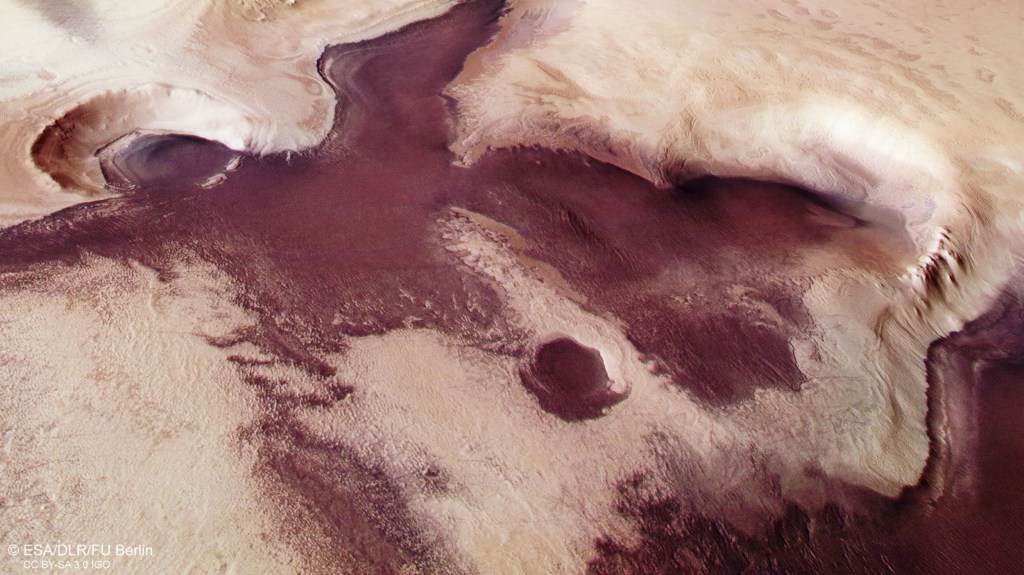 As Christmas approaches, it appears that even Mars is getting in on the festive spirit.

The defined wings of an angelic figure, complete with halo, can be seen sweeping up and off the top of the frame in an image taken by the high resolution stereo camera on the spacecraft orbiting Mars.

Right next to the angel figure is a large heart. The shapes appear to jump out of the tan-coloured surface of Mars.

Their dark colour is a result of the composition of the constituent dune fields which are made up of sands rich in dark, rock-forming minerals that are also found on Earth.

This festive scene is found in the south polar region of Mars, with the pole itself located directly out of frame to the right.

The south pole is typically covered in a 1.5 km-thick ice cap measuring around 400km across and with a volume of 1.6 million cubic kilometres, just over 12% of which is water ice.

But as Mars’s southern hemisphere is currently experiencing summer, the image shows the planet’s southern polar ice stores at their lowest annual levels.

The angel and heart features are both made up of various features.

The angel’s hand, seen as if reaching to the left, is thought to be a large sublimation pit – a feature that forms as ice turns to gas and leaves empty pockets and depressions in the planetary surface.

Meanwhile, an impact crater makes up the head and halo of the angel. It was likely created when a body from space collided with Mars’s crust.

The heart is underscored by a steep line of cliffs or steep slopes created by erosive processes, and separated from the dark expanse of dunes below.

The origin of this dark material, which is found all over Mars, remains unclear, but scientists suggest it once existed deeper below the surface in layers of material formed by ancient volcanic activity.

Although this material was initially buried, it has since been brought to the surface by ongoing impacts and erosion and then distributed more widely across the planet by Martian winds.