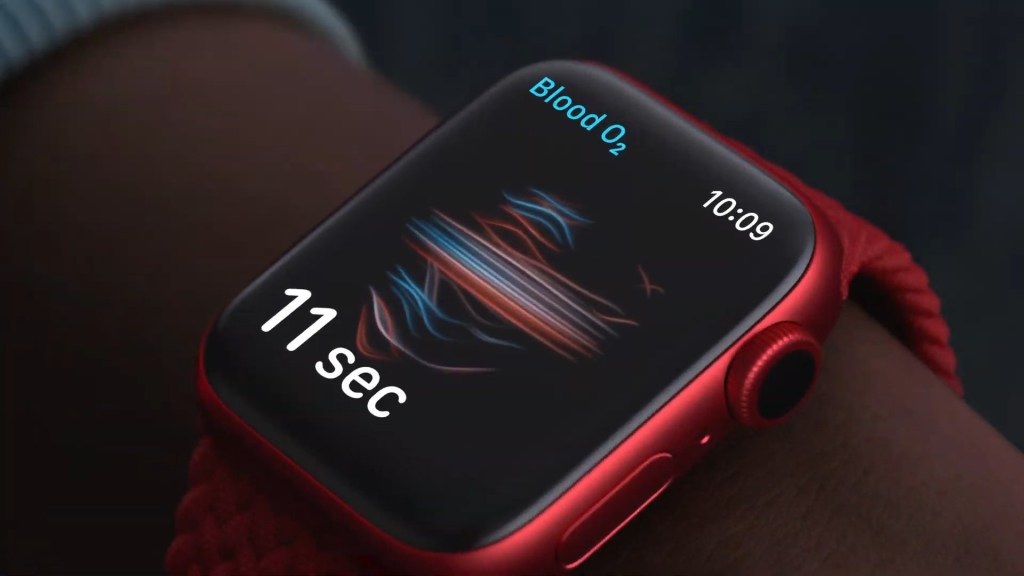 Taking over the mantle from last year’s Series 5, the new wearable device adds a performance boost and a blood oxygen sensor for the first time.

It uses red and infrared light to give wearers an insight into their oxygen saturation, or SpO2. This represents the percentage of oxygen being carried by red blood cells from the lungs to the rest of the body, and indicates how well this oxygenated blood is being delivered throughout the body.

The aim is to give Apple Watch wearers better insight into their overall respiratory and cardiovascular health and builds on things like the EKG feature from the Series 5.

The blood oxygen sensor works through a new app that comes on the Series 6 and takes about 15 seconds to give a reading.

‘To compensate for natural variations in the skin and improve accuracy, the Blood Oxygen sensor employs four clusters of green, red, and infrared LEDs, along with the four photodiodes on the back crystal of Apple Watch, to measure light reflected back from blood,’ explained Apple in a statement.

‘Apple Watch then uses an advanced custom algorithm built into the Blood Oxygen app, which is designed to measure blood oxygen between 70 percent and 100 percent.’

Like each iteration of the Apple Watch, this new one is more powerful thanks to a new processor. The S6 processor inside the Watch Series 6 is 20% faster than the Series 5 and is based on the A13 bionic that sits inside the iPhone 11 Pro.

One of the big plus points for the Apple Watch Series 5 was the always-on display. Not only has that carried forward to the Series 6, but Apple says the display is two-and-a-half times brighter, making it even better to see in direct sunlight.

Despite the bump in performance, Apple says the Series 6 will maintain the same 18-hour battery life of its predecessor.

Apple has added an always-on altimeter and several new features and watch straps for the Series 6. It’s worth pointing out that the Series 6 maintains the same design as the Series 4 onwards, so if you’re upgrading it’ll still work with any straps you may have accumulated.

There’s finally a Product(RED) version of the Apple Watch with Series 6 and a new type of strap called a Solo Loop that’s made from one piece of silicon without any buckles or adjustments.

That’s not all though. Apple also revealed the Apple Watch SE which – just like the iPhone SE – is a stripped-down affordable Apple Watch that will appeal to those on a budget.

The Apple Watch SE runs on an S5 chip which Apple says is two times faster than the Series 3 – the company’s current budget option. It packs in an accelerometer, gyroscope, compass, altimeter and fall-detection.

Part of the reason the Watch SE could be a real hit is to do with a new service Apple revealed called Family Setup. This means you can add multiple Apple Watches to one iPhone.

The example used by the company was parents equipping their kids with Apple Watches and then using them to check in on their location and give them limited access to messaging. There’s also a Do Not Disturb mode for doing school work.

‘For family members who do not have an iPhone, Apple Watch offers a remarkable set of features that can help them keep in touch with loved ones, be more active, and stay safe,’ said Jeff Williams, Apple’s chief operating officer. ‘With Family Setup, we’re thrilled to extend these features to the entire family, so everyone can gain more independence and live a healthier life.’

The Apple Watch Series 6 starts at £379 with just GPS on board, and then jumps to £479 if you opt for the version with both GPS and cellular connectivity.

Meanwhile, the Apple Watch SE will start at £269 for the GPS model and move up to £319 for the GPS and cellular model.

Both versions are available to pre-order today and will start shipping to customers on Friday, September 18.