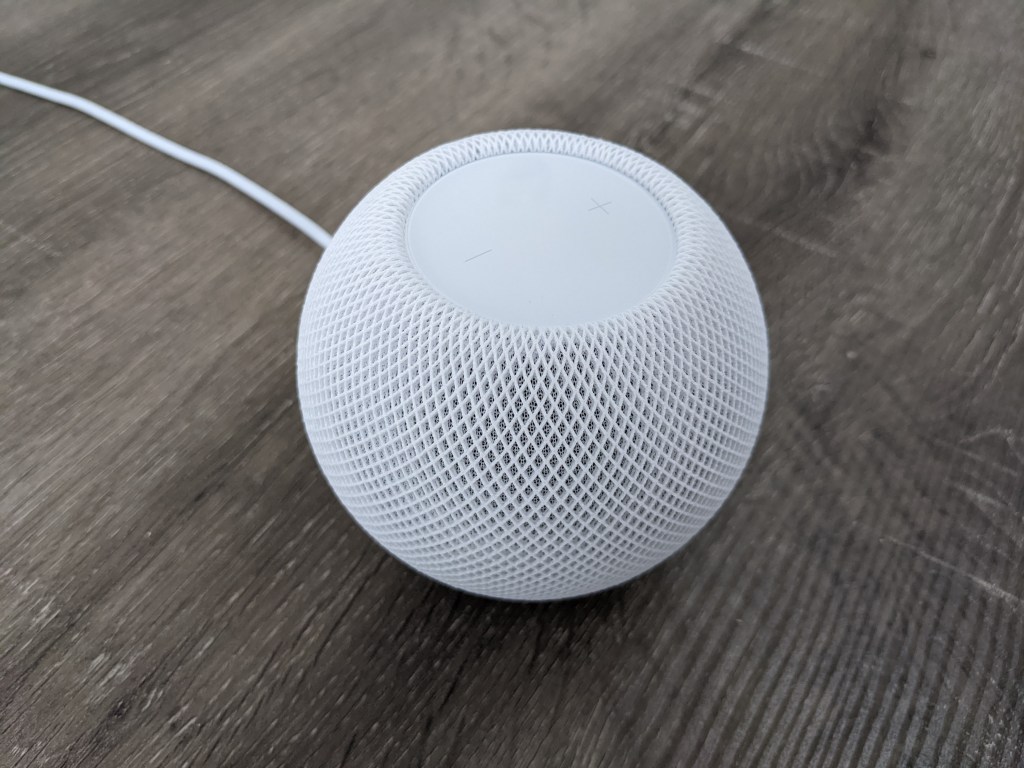 The original HomePod was quite a daunting prospect when it launched back in 2018.

Nobody questioned the audio quality of Apple’s first smart speaker, but the required commitment to Apple’s ecosystem meant many heads were turned towards Google and Amazon.

Perhaps taking a leaf from its rivals, Apple is back with a follow-up: the HomePod mini, which is an altogether more attractive option for a lot of people.

To start with, there’s the price. The original HomePod launched at £319 (it’s now £279) while the mini will set you back only £99. Secondly, the 3.3-inch spherical design makes the HomePod mini a lot less imposing. It’ll sit happily on a bookshelf, bedside table, coffee table or mantlepiece and do its best to look like some fancy, fabric-covered candle.

While the speaker is spherical, there’s a touch sensitive pad on the top that lets you tap, double tap or triple tap to control music playback. A + and – sign are visible so you can adjust volume.

Just because Apple has shrunk the size, doesn’t mean it’s diluted the quality. The HomePod mini is a fantastic sounding smart speaker.

Inside the speaker is a custom full-range driver and dual force–canceling passive radiators. At the bottom is an acoustic waveguide that channels the sound down and out of the speaker through 360 degrees. I found a comforting level of bass from the diminutive sphere and no distortion even when I pushed the volume level up.

I found the HomePod mini would easily fill a decent-sized room with sound if you wanted to crank up a song. But it was also ideal for playing the radio softly in the background during work or dinner.

Of course, there’s the option to pair up a second HomePod mini if you want to blast your tunes in stereo. And if you already have an original HomePod – or want to buy more minis – you can set up muilti-room audio that runs through AirPlay 2 – Apple’s own WiFi streaming tech.

You can control all the different speakers either through an iPhone or iPad via the Home app, or you can talk directly to Siri. Telling one of the HomePods to ‘play jazz in the kitchen’ will soon have Louis Armstrong crooning from your countertop.

There are a few neat tricks tucked away inside the HomePod mini. One of which is the ‘intercom’ feature that lets you send voice messages through the house. You can send these messages either to one HomePod in particular or have it broadcast through all the speakers like Big Brother himself.

If you’ve got a few smart devices throughout your home and they work with Apple’s HomeKit platform then you can use the HomePod mini to issue instructions. For example: ‘Hey Siri, turn on the lights’.

You can also ask Siri to scan the web, set reminders or – God forbid – read you the news.

Lastly, the inclusion of Apple’s U1 chip means you’ll soon be able to automatically hand off anything playing on your iPhone to the speaker just by moving near it.

The proximity sensor kicks in and you’ll get a little haptic feedback as the crossover happens. It’s not live yet so I couldn’t test it, but Apple says it’s coming later this year.

As you’d expect, the HomePod mini is geared towards Apple Music and although third-party music services will be provided for, you’ll want to be locked into Apple’s offering of over 70 million songs to get the best experience.

If you’re an Apple user on the hunt for a smart speaker then the HomePod mini is the answer to your prayers. I’ve known many people who have opted for an Amazon Echo Dot over the original HomePod because they wanted something small and inconspicuous for the study or a bedroom.

The HomePod mini fits right into the category that Apple was missing with the original speaker. It’s true that the functionality isn’t as broad as Amazon’s all-conquering Alexa, but the audio quality is noticeably better.

Considering that most of us want smart speakers for listening to music with a few extra functions on the side, the HomePod mini delivers on all fronts.

PrevPrevious‘A wake-up call’: how Pfizer’s Covid vaccine could transform the world
NextForget 5G, UK presses ahead with research into 6GNext